(Photo of NYC taken from the Ferry on the Hudson River)

Recently, my husband and I celebrated our 25th wedding anniversary in NYC and DC. We’d never been before, and of course planned out all the tourist excursions with our travel agent. We’d finally arrived and were so excited to be in the Big Apple!! All the hustle and bustle was energizing and just amazing. We were awestruck! Being from the West Coast, the first thing that caught our attention was the high amount of traffic and pedestrians within such a small amount of space! We were both oddly confused and a little shocked that NYC pedestrians did not heed the “Walk” or “Do Not Walk” crossing signals! I mean, really??Nobody cared, as taxicabs and autos barely missed hitting them as they nonchalantly crossed intersections in hurried paces. Everyone rushing to get nowhere fast. To my amazement, even the police officers on the street corners seemed to be okay with it. Can you believe it? Lol! You have to understand, where we’re from, if you get caught not following the rules of the road, you get your ass a ticket – plain and simple. “Honking your car horn isn’t gonna make it go faster!!”, yelled the man walking behind us. He was right! So many horns honking, flailing of the arms, and sirens galore. I could spot the locals quickly because they walked mostly alone, dressed in business attire and held either a cell phone to their ear or wore an earpiece chatting away. Honestly, soon afterwards, more like within 10 minutes, we were walking around town like regular locals. My husband even mentioned to me, as he caught up, that if I bothered to stop and look behind me, I’d have noticed I lost him in the crowd! Regardless of his slower pace, we loved touring and learning about all the local history, sampling fine cuisine, watching entertainment, visiting museums and monuments. The most humbling experience was visiting the 9/11 Memorial Museum. It brought back a flood of memories like it happened yesterday. So very sad. Also, being able to view the One World Trade Center up close was breathtaking. The structure is beautiful. Although we enjoyed our time in NYC, we were ready and eager to move on and away from the hustle and bustle of the loud, busy city. 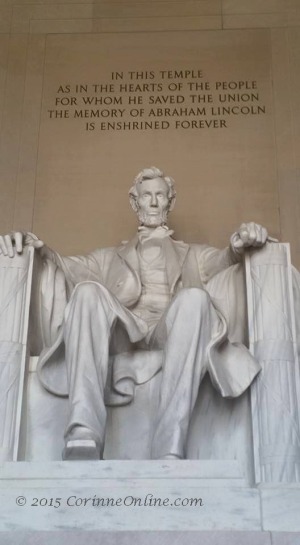 Next stop, the Twilight Zone . . . No, Washington, D.C., of course!! When we arrived it was like a breath of fresh air. Yes, there was still traffic, but the amount of pedestrians was reduced significantly. We actually had elbow room if we walked! We decided to give ourselves a much deserved break from all the walking we did in NYC, and resorted to taxicabs when needed. Yes, we could’ve taken the trolly, but this was a very rare occasion. How many times are we going to celebrate 25 years of heavenly bliss? More touring and learning local history, delicious food and museums all crammed in to three days. My husband is a history buff, whereas I can learn about history facts with good intentions, but ask me an hour later, and I’d have forgotten. Okay, make that maybe a week later. For example, I saw the Capitol building from a distance. Later, we were in front of the White House. That night I asked him about the Capitol, then asked him where the President lived? After he rolled his eyes, he whipped out his camera phone, then showed me the photo he snapped while we were both in front of the White House. Alright already! I have to blame my absent mindedness to all on the humidity and wine drinking I was forced to endure! That’s my story and I’m sticking to it. Wish we could’ve stayed a couple more days, but it was time to get back to the reality of home, work, family and responsibilities.

We agreed that was the best vacation we’d had together in years! I’m confident enough to take most of the credit for planning the entire trip. We’d definitely go back to visit either places, and I’m sure we will eventually. Maybe on our 50th? Home is where the heart is, and our home is the West Coast, specifically Southern California where we get one season, summer. Did I mention we’re in the middle of a drought, and so need the rain?

If you’ve made it this far, then thank you very much for reading my ramblings! And, no, I don’t have a glass of wine in hand.

One thought on “Walk, Don’t Walk & a Whole Lotta Noise”

Poetry and Other Ramblings

An exploration of writing and reading

Thoughts on life... by Donald B. Wilson

The Doctor Is Out

Showing the beauty of this world through the people, places and culture

Because poetry. And petals.

Smile! You’re at the best WordPress.com site ever

Glorious Results Of A Misspent Youth

Saving The World From Stupidity...One Blog At A Time

You are a miracle - Let it happen

The Gorey Bits Of Me

Looking for the rays of sunshine I know are out there.

A Canadian Perspective on Living in the Windy City!